Your grandmother defined the phrase 23 Skidoo like this: "When in doubt, get the hell out of here now."

You should have considered her words on your 10th birthday.

You remember that past incident where you trapped in a tiny building called the Place, You remember how a mysterious force from another dimension gave you a power of invincibility. Now, a week after your 23rd birthday, you return to the Place, and destroy it once it for all - only to be trapped again.

All you need to do is make a series of certain action to put out the spell from the Place, and close the portal to another dimension.

However, would you sacrifice your own humanity for the power of invincibility, or preserve everything what makes you a human being?

Finally get to make this under seven days. I was inspired by games that are known for their realism and difficulty such as Pathologic and KGB. So I made the most difficult game I could think by using a premise based on these two game jams' themes. Then it got very difficult that I have to dial it down, and dropped some hints along the way.

The game will generate the solution. On "Not Easy" difficulty, you need a pen and paper to do process of elimination. If you hate yourself, then put on two other difficulities. None of them require process of elimination, but the random solution for "So Hard" shares a same pattern sequence with "Not Easy". You still can speed-run through this with a pure luck.

If the browser is not working for you, then you could download them if you want. I use Linux desktop, but Windows seems used commonly among gamers.

If you are generous, please tip me at https://ko-fi.com/designergaze.

The Theme for this month's GWJ is 'Tiny World'.

And the Wildcards are:

The Theme for this week's WGJ is 'Vulnerable Invincible'.

Planning and Coding: All by myself - Jay Whang

Artworks:
Most of the photographs used for the game are Public Domain and came from Wikimedia Commons. Artworks are all PUBLIC DOMAIN, but I'm still going to credit the artist. David Lewis Johnson and Luigi Castellani made these artwork for the tabletop RPG Silent Legion (from Sine Nomine Publishing)

Here are the links:

If you are dissatisfied with the browser version, then try the off-line downloadable version. Linux and Windows only. Get it before your internet connection suddenly cut off.

Just unzip one of them and you are good to go.

hey how are you doing?

I am doing fine. How are you?

I liked the story telling and mechanics/ui. Although I definately needed more hints- I’m fairy sure I only got through because of dumb luck :D 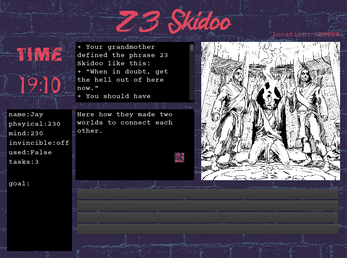 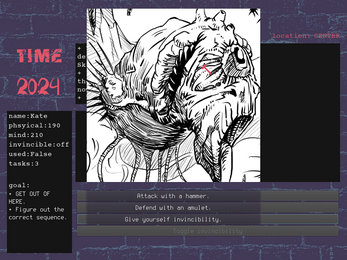 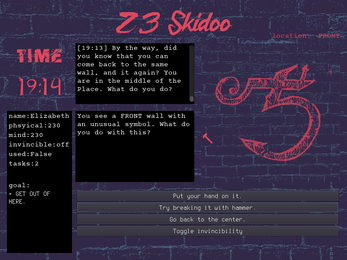